I’m going to just come out and say it.  Aquaman is lame.  And sure, much effort has been invested by DC Comics to give the character just a bit of much needed edge in the past few years, though his corny past is never terribly far behind.

If your preferences ran toward water-based superheroes, as mine tended to do, Aquaman was never a character I could take particularly serious. 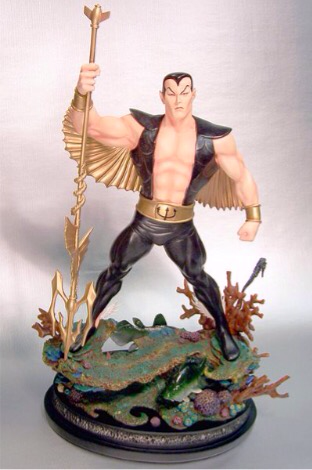 Now Namor, The Sub-Mariner?  Quite possibly the coolest king Atlantis ever had as well as one of Marvel Comics’ earliest characters.

Though the oddest thing about him is that–when not being an arrogant douche–he literally spent an inordinate amount of time trying to conquer the surface world, and yet he somehow remained likable.

Namor was an ‘anti-hero’ before the word ever entered the popular lexicon.

Though what’s the point of all this, you may be asking?

That’s simple.  For a long time it was assumed that the rights for Namor were at Universal Pictures, along with those for the Incredible Hulk.

As far as Namor is concerned, that’s  apparently not the case, and Marvel Studios may be prepping a movie based on their irascible Prince of the Deep!

And to whet your appetite a little bit more–as if that were even necessary–here’s the opening to Namor’s cartoon, made in 1966.