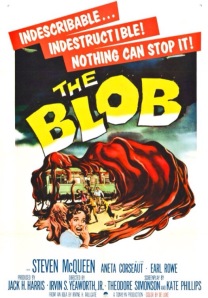 I don’t recall seem the original The Blob (released in 1958 and starred Steve McQueen and ‘an exciting cast of young people’) though oddly enough the creature featured in the trailer seems to out-act the humans that it shares screen time with.

And typically I would seek it out, to see how faithful the remake is to it but the Chuck Russell-directed reboot was so satisfying, so delightful visceral (all the effects were practical, since CGI wasn’t in use at the time).  Though what made the movie most fascinating is that, despite the way the creature ran through the cast–even children weren’t safe, something many modern movies tend to tip-toe around–none of the deaths felt mean spirited or sadistic, which is always a good thing.

So imagine my reaction when I learned Hollywood–in their finite wisdom–is planning another reboot! 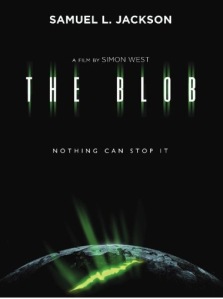 My issue with it is why are they remaking a movie that was already pretty damn good?

So, I have serious difficulty imaging it better than the 1988 movie and if you can’t clear that particular hurdle, I am not sure I see the point of hue whole enterprise

And let’s be honest.  There are plenty of terrible movies that would really benefit from a reboot/remake.

Though The Blob isn’t one of them.