Considering how ISIS (the International Secret Intelligence Service)–not the terrorist organization currently in vogue–seemingly did everything they could undermine their own efforts, they hardly needed help from outside.

Or inside, for that matter.

That being said, I feel reasonably certain that there there was someone within ISIS doing just that.  Perhaps they were too caught up in their struggle with ODIN (the Organization of Democratic Intelligence Networks) and various flavors of international terrorists/arms dealers to notice what was going on right under their noses.

And the name of their Manchurian Candidate?

Dr. Krieger!  A man so stupid–or was his ignorance a deliberate ruse to lull his fellow agents into a sense of false complacency?–that he regularly operated on people, yet couldn’t name any of the bones of the human body!

And while ISIS imploded at the end of the fourth season, but Krieger’s antics sped it along the way.

As proof I offer Conway Stern (Coby Bell), who worked for ISIS before it was discovered that he was attempting to steal the plans for a device known as a ‘whisper drive,’ which could render submarines undetectable.  Due to the Truckasaurs-like strength of Agent Lana Kane (Aisha Taylor), Conway lost his hand as well as the drive, though he was still able to escape.

If you’ve followed Archer you’re probably aware that Krieger (Lucky Yates) was probably a clone of Hitler, which if you’ve seen The Boys From Brazil you’d know that Hitler clones are usually up to no good. 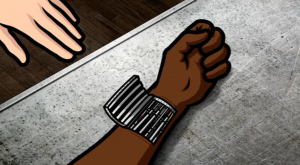 The most blatant example of Krieger’s perfidy?  There are quite a few, but the one that sticks in my craw is from the third episode of the first season, Diversity Hire, when ISIS hired Conway Stern, an African-American Jew (“A diversity double-whammy!“) mainly because Archer (accidentally) outed all the other agents of color, resulting in their deaths. 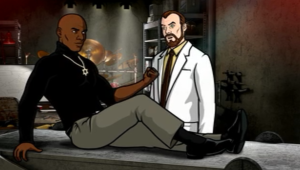 Could Dr. Krieger have betrayed ISIS because of some deep-seated hatred of everything they stood for (I honestly have no idea what that is) or is the truth more mundane, and Krieger was just an monumental asshole?

I think the latter.

2 thoughts on “Betrayal! Thy Name Is Krieger!”