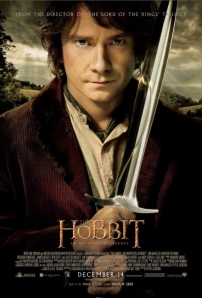 “The Journey May Be Unexpected, But Beautiful Vistas, Interesting Challenges, And Humor In The Oddest Of Places Make The Journey More Than Worthwhile.”

A few hours ago I got back from seeing Peter Jackson’s “The Hobbit” An Unexpected Journey” at 48 fps (frames per second) and 3D, and I have to say that the faster frame rate–literally–had no effect on my enjoyment of the film (nor anyone else’s, that I could tell).

In fact, I couldn’t notice any difference from a movie made at a more traditional 24 fps, though I don’t know if that was because my eye was not discerning enough to pick up the difference.

I enjoyed “The Hobbit” quite a bit more than Jackson’s earlier ‘Rings’ films, because this time around our intrepid adventurers didn’t leave their sense of humor behind.  I don’t know if the changes came from the involvement of Guillermo Del Toro (such humor that pops up here is quite common in his films, while I have not seen it in any of Peter Jackson’s; till now, that is), who was originally going to direct before MGM flirted with bankruptcy and he moved on, but they were welcome.

That being said, the first half-hour or so concerned me somewhat, if only because the voyagers took awhile to assemble (as well as there being a bit too much singing for comfort).  Luckily, like an old-fashioned train, it may be awhile before it builds up enough steam to get going, but when it moves, it moves.

Another interesting thing was Gollum, motion-captured by Andy Serkis, who seemed much more facially expressive and animated–pardon the pun–than I recall him being in the prior films.  He also brought a significant amount of humor, laced with equal parts menace, desperation, or anger.

Elsewhere in the film, the CGI was also excellent, though I was wondering for awhile about the proportions of some of the dwarves (done with forced perspective), a few who seemed more proportioned like average humans, but shorter.

I am not a big fan of J.R.R Tolkien–I have enjoyed the films far more than his writings–but “The Hobbit” moves much quicker than its almost three hour running time would lead one to believe.  Though I actually had to go to the toilet for at least half that running time, though I didn’t leave my seat till the film finished.

If that’s not a vote of confidence, I don’t know what is.

One thought on “‘The Hobbit: An Unexpected Journey’ Review”