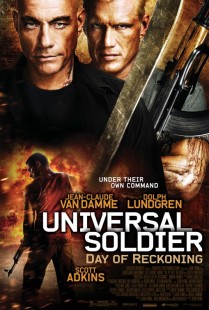 I recently read a review, that claimed that John Hyams’ “Universal Soldier: Day Of Reckoning” was better than most of the ‘Universal Soldier’ films that were released theatrically (‘Day of Reckoning’ was direct to video). I am not sure if that’s the case, though it is more violent.  And by ‘violent’ I mean lots of MMA-type violence that’s more physical than most are accustomed to seeing. And while I enjoy that most of the effects on display are practical, it’s a brutal film, though there’s something to be said about the way it doesn’t glorify any of the acts of physical violence on display.

The plot is more complex than traditionally found in films of this nature, and works best if you let it unfold at its own pace, because there’s a logic to the presentation, though you’ll won’t see it unless you sit through the entire film.

Jean-Claude Van Damme, as the film progresses, seems to be channeling Col. Kurtz from Francis Ford Coppola’s “Apocalypse Now,” which can’t be a coincidence.  All the other characters seem to exist just to get the stuffing beat out of each other, and don’t make much of an impression.

John Hyams happens be the son of Peter Hyams, who directed films like “Capricorn One,” “Time Cop,” “Outland,” and “The Relic,” among many others.  John Hyams filmography isn’t quite as extensive, though it’s growing.