Whether or not you prefer the version of Quicksilver that appeared in X-Men: Days of Future Past or Avengers: Age of Ultron (my money is always on the latter because in Age of Ultron Quicksilver was an actual character, while in Days Of Future Past he was little more than a deux ex machina, designed to pull the X–Men’s fat from the fire) the character ended up being the most interesting part of the movie, though many fans were torn over how the character looked.

Here’s Quicksilver from X-Men: Days of Future Past. 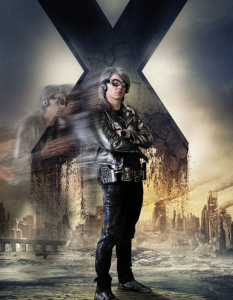 He looks pretty bad, especially compared to the interpretation from Age of Ultron.

Now, if fantastic, god-like power and (admittedly) cool visuals are the metric of being a superhero, then the Fox version was better; though if looks and being an actual character matter, Marvel Studios’ version was hands-down the winner.

Recently this image of Quicksilver from X-Men: Apocalypse was poster on Superherohype, and if at all possible, he looks even worse (and what’s with the tiara he’s wearing?).

Now, admittedly this image lacks any sort of context and it’s likely isn’t how Quicksilver will dress for a majority of the movie (since Mystique is dressed the same it implies that they’re infiltrating some sort of place) but he actually looks worse than he does in the first movie.

2 thoughts on “Is Fox Trying To Make Quicksilver Look Even More Uninteresting?”