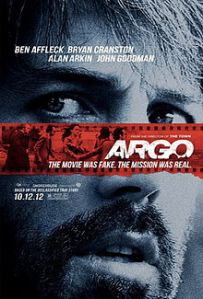 “Argo,” despite revolving around a fake film, is a very real, engaging movie.

I recently tried to watch J.J. Abrams’ “Super 8,” but its depiction of the 1970’s for some reason felt like it was filtered through someone’s perception of what the era should have felt like, as opposed to being based upon any real metric.  Ben Affleck’s “Argo” doesn’t appear to suffer from the same problems.  The 1970’s (1979, to be exact) in “Argo” feels authentic and the movie, from the old Warner Bros. logo, to the way people dressed, feel true to the time.

The film is almost divided into two parts, One part would be Tony Mendez (Ben Affleck) suggesting the idea of using a fake film as cover to rescue six American Embassy personnel in Iran, and him gathering the resources to do so.  This is the best part of the film it feels that’s where we meet Lester Siegel (Adam Arkin), a movie producer who also happens to be the wittiest character and funniest part of the film.

The problem is that he’s on screen for only a half hour or so, taking a lot of the energy–and all the humor–with him.

The second part of the film revolves around Mendez going to Iran, and working to free the hostages.  The film lags a bit during this section, though picks the closer their escape plan comes to fruition.

Ben Affleck’s direction is confident, and the film works, despite the draggy middle section.