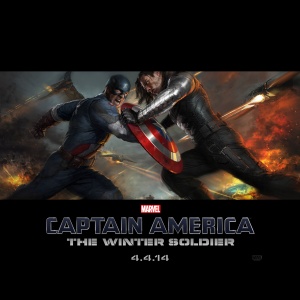 I have to admit that while I enjoyed the first Captain America feature, I didn’t love it.  Sure, it had all the elements for an awesome adventure: direction by Joe Johnston, director of the underrated “The Rocketeer”; a Marvel character steeped in Americana and history, and the Tesseract (known as The Cosmic Cube in Marvelese).

Yet somehow it didn’t quite gel for me. It wasn’t terrible by any stretch, but it did feel a bit clunky.

When I heard about the sequel, “Captain America: The Winter Soldier” I was curious, though not overly enthusiastic.

That is, till I heard some of the music for the upcoming movie.  Kevin Feige, the head of Marvel Studios, says that ‘The Winter Soldier’ will be a political thriller in the vein of “The Day of the Jackal” and have a more international flavor.  The snipped of music reflects this change, moving beyond the overly patriotic tones of the first film.

I know that you can’t tell what a movie is like (entirely) by its music, but “Captain America: The Winter Soldier” is shaping up to be very, very interesting.