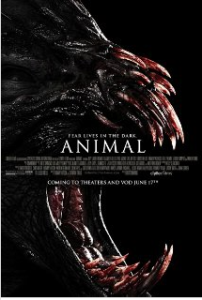 “”Animal” doesn’t break any new ground, but it is attractive to look at, and has some great pratical creature effects.”

Anyone who’s read this blog knows that I don’t particularly enjoy features from The Asylum.  For those unfamiliar with the company they produced movies like Sharknado, all those Mega Shark movies, as well as ZNation.

My problem isn’t that they are blatantly low-budget, it’s that they don’t seem to accept it–relying on cheap-looking digital elects way more often than they should–and also don’t seem to understand that using fewer special effects would work out better than lots of cheesy digital ones.

Most of their output turns up on the Syfy Channel, which isn’t a bad thing because I am not sure anyone else would want it.

Though Syfy isn’t the only channel that caters to genre-based entertainment.  There’s also Chiller, which is more focused on horror.  From what I have seen of their original productions–while they’re not Asylum bad–they’re generally pretty mediocre.

Then I saw Animal and have to admit that it was pretty good.

Which is not the same thing as saying that it’s a great movie, though it is well-done and doesn’t make you feel as if you’ve lost moments of your life that you’ll never get back.

First off, this is the most diverse movies, in terms of people, I have seen in awhile.  Two of the principal characters, Alissa (Keke Palmer) and Jeff (Parker Young) are not only brother and sister, but different colors as well.  The movie doesn’t dwell on this fact at all, which was refreshing.  Alissa also happens to be dating a white guy, Matt (Jeremy Sumpter) while all of them are friends with a gay guy, Sean (Paul Iacono).

Unfortunately, the writing for the most part fails them because no one has any depth, which is a pity.

Another strong suit of the movie are the special effects, by Gary J. Tunnicliffe, who’s done effects work for a range of films as diverse as many of the Hellraiser sequels (most of which are pretty lame, with the exception of Helraiser II, Hellraiser: Bloodline, Hellraiser: Inferno) to Apollo 18.

And the creature he’s shepherded here is pretty cool.  it appears to be a full-body prosthetic, combined with an animatronic head.  It’s absolutely gorgeous and lit in such a way that makes it particularly effective, though I get the feeling that if it was tromping around in broad daylight for the entire movie (which it does towards the end) that it wouldn’t matter, because it’s that good.

Animal is currently on Netflix.