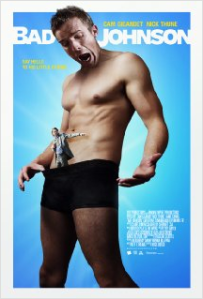 “I can’t deny that your dick can sell dog shit to a freshly mown lawn.”

Nothing about Huck Botko‘s “Bad Johnson” feels real–though to be fair it’s is about a man who’s penis decides that life could be better without him, so pretty much the entire “reality” thing is thrown out the window.  Rich Johnson (Cam Gigandet) plays a womanizing man-whore who–though losing his dick–becomes a better person.

Though let’s be honest: There are probably better ways to do so.

And if that weren’t bad enough, his anatomy has somehow become personified in the person of Rick’s Penis (Nick Thune)–Yep.  That’s his name according to IMDB and the film’s credits–a walking, talking personification of libido.

Such an outlandish scenario could be excused if it were really funny (for some reason I imagine a pre-freebasing Richard Pryor as Rich’s Penis.  That would be gold).  But it’s not.  Sure, there are moments when things are amusing, but for a movie about a man who’s penis goes on walkabout, it’s kind of dull.

Though prior to his dick’s attempt to steal the spotlight, the movie’s about Rich, who’s claim to fame was that he would screw virtually anything on two legs, as long as it was female because Rich doesn’t have eyes for the guys.

Though he somehow believes that his penis is the source of his problems–as if it had a mind and a will of its own–and before you know it, it does.

Though what he didn’t ask was for it to be personified in someone who’s, for lack of a better term, a dick.

Then again, wishing away you privates was never an exact science, so sometimes you get what you get.

So Rick is sans penis–he’s like a Ken doll down there, thanks to CGI–though eventually he gets over the fact that he no longer has a cock, and stumbles onto the realization that if he didn’t devote so much time and effort into getting laid he could save some serious money.

As if being able to maintain a savings account somehow makes it all worthwhile.

For a movie that’s about a guy who’s cock goes on walkabout, it’s surprisingly tame.  Cam Gigandet is an attractive, as well as charming, actor but he’s wasted here because relatively little, other than to be attractive and charming, is asked of him.

Though to be fair, “Bad Johnson” has taught me that magical castration isn’t a bad thing because it means that you focus less on getting laid and more on treating women as people–before you try to bed them because Rich, despite lacking his equipmunk, does just that.

Though it’s sort of odd that for someone who before he lost his junk was so sexually driven the idea of oral sex never occurred to him.

Which means that Rich’s Penis–because all penis’s are vengeful and controlling–has to go about sabotaging Rich’s life, particularly any attempts he makes at being happy with a person of the opposite sex.

Through it all, I learned some interesting things about Rich’s Penis.  For instance, it’s a sexual predator.  There’s a scene in the movie where Rich’s Penis separates a Catholic schoolgirl from her friends like a lion preying on the weakest member of the herd (though what’s arguably worse is that her two friends seem perfectly OK with her going off with some weird guy on a bicycle).

It’s also racist.  I could count the amount of African-Americans in this film with two fingers–one happened to be an extra at a wedding, while the other was attempting to blow Rich’s Penis while wearing a paper hat, because all African-Americans work at fast-food joints (a detail that stuck out because there was virtually no reason for it to be there in the first place).

The movie’s conclusion–assuming that anyone stayed around that long, which I have reason to doubt–makes even less sense because Rich has to face his penis in combat (For a dick Rich’s Penis fights really well, which is strange because my penis is as anti-violence as they come, and really hates being hit).

When you think about it, Rich’s Penis is not only a dick in the anatomical sense, he’s also a true dick in every sense of the word.

“Bad Johnson” isn’t terribly funny, in fact it’s not terribly anything because it’s soft, and too interested in being inoffensive–unless you happen to be African-American or Asian, then all bets are off.

Though to be fair the Asian joke was pretty funny, mainly because it came out of left field and Rich (not his penis) was talking to an Asian person at the time he said it.

Normally this would imply that someone would know better–after all, it’s in bad taste to insult someone to their faces when you’re supposed to do that sort of thing behind their backs.

Though the good thing about being a dick means that you never have to say that you’re sorry.