Paul Kersey, as played by the late Charles Bronson, has to be the most cursed person on the planet.  The Deathwish films aren’t supernatural, but the way violence seems drawn to Kersey makes it as logical an explanation as any (other than it being a movie, that is).  If you had to deal with Samara from “The Ring” you have seven days to either pawn the tape off on someone else or solve Samara’s mystery, while in the case of Paul Kersey, all he seems to get is a bus ride to his next murder spree.

I get the feeling that if he were headed to Amish country he would be attacked by roving gangs of Amish thugs trying to go Rumspringa on his ass (which is an interesting idea for a movie).

In the original “Death Wish” Paul Kersey’s family is attacked by hoodlums, who kill his wife and rape his daughter.  As a result he becomes a one-man hit squad, tracking down the killers and dishing out justice when the police can’t (which is pretty often).  The original film, based upon a novel by Brian Garfield, was a harrowing experience because everything unfolded in a realistic fashion.  It also doesn’t hurt that it took place in New York City, which is a character in and of itself.

Despite being extremely effective, Kersey is a reluctant vigilante.  You’re shown his progression, as he thwarts a potential mugger with a sock full of quarters till the city becomes his shooting gallery.

Deathwish is probably one of Bronson’s most memorable roles, and it’s easy to see why.  It’s important to mention that Kersey is really hit hard by some horrific events, and it shows.  Unfortunately, in the case of the sequels, this element is lost.

In other words, in the sequels he’s essentially the Terminator, minus the brawn and accent.  He kills almost as if the producers have no other ideas, as opposed to it being a pressing need on the part of Paul Kersey.

A clever writer could have done something interesting with the idea, maybe introducing the idea of Kersey being shell-shocked (essentially what we call PTSD or Post-Traumatic Stress Disorder, today).

In “Deathwish 2” he moves with his daughter, who’s virtually catatonic from the attack she survived in the first film, to Los Angeles.  Though it wouldn’t be a Deathwish film if Paul Kersey and what remained of his family lived happily ever after, so this time around his housekeeper is raped by more toughs (one played by Lawrence Fishburne.  In fact, quite a few well-known African-American actors turn up sooner or later.

Usually as a criminal, but it’s a job.

His daughter is kidnapped, and despite that she hasn’t recovered from when she was raped in the first film, she’s about to get more of the same treatment.  Somehow she gets it together enough to leap through a window, impaling herself on a fence.

The impaling was an accident, though considering all that she had gone through, perhaps it was a relief of sorts.

The first film was very serious and pretty realistic, in that Paul Kersey gradually ups the violence he dishes out to criminals, because it’s not something that comes natural to him, though in the sequels, all moderation goes out the window, a trend that becomes almost comical as he progresses from film to film.

In these movies all politicians are self-serving (Well, that’s something it got mostly right), while the criminals are all remarkably vicious.

Bronson wasn’t a young man during the first movie, which is probably why you’ll notice that he does more running in that film than later entries in the series.  Usually, if there’s running to be done, it’s the younger, more spry hoods who are doing while Bronson shoots at them, like ducks in a barrel.

Something worth mentioning about the thugs in these movies is that they’re like a United Nations of villainy.  Blacks, whites, hispanics, everyone is represented.  They may be rapists and killers, but they doesn’t appear to be a racist bone in their bodies, which is kind of weird when you think about it. 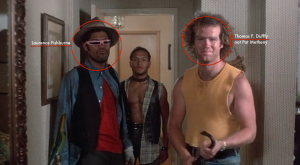 Deathwish through Deathwish 4 were directed by Michael Winner, a British director.  You can probably tell that he’s not native to this country because his vision of what gangs are like feels like something out of “West Side Story,” except significantly more rapey and violent.

Paul Kersey hotfoots it out of Los Angeles, because he’s avenged his daughter and housekeeper, and the police there weren’t too keen on the whole vigilante thing.  He heads back to New York to stay with a friend till he can get back on his feet though it should go without saying that his friend lives in a neighborhood that resembles the most battel-scarred sections of Iraq or Afghanistan, where a violent gang terrorizes the citizens.

Three breakout stars this time around are Alex Winter (“Bill And Ted’s Excellent Adventure”) as ‘Hermosa’ and Rico Ross (“Aliens”) who’s known as ‘The Cuban’ and–much to my surprise–Marina Sirtis (Star Trek: The Next Generation) as ‘Maria.’

What’s also interesting is that Jimmy Page, of Led Zeppelin fame, did the music, which sounds more like something from Issac Hayes’ “Shaft” theme than what comes to mind when I think of Page.

Even the police are reluctant to patrol in the gang’s territory, which is why Chief Shriker (Ed Lauter) makes a deal with Kersey:  He gets rid of the trash, and the police won’t throw him in jail.  It’s a sweet deal, because Kersey by now has a real aptitude for murder, and he’s also helping clean up a neighborhood overrun by gang-bangers, so it’s all good.

“Deathwish 3” at this point is little more than a very violent cartoon, with none of the realism of the first film, and to a lesser degree, the second.  Charles Bronson, while I wouldn’t exactly say that he’s phoning it it, is pretty much coasting.

For “Deathwish 4: The Crackdown” there’s not only a snazzy new subtitle, but a new director as well, as J. Lee Thompson replaces Michael Winner.  It’s a welcome change, as Thompson brings a somewhat grittier–though no less unrealistic–tone the the proceedings. In fact, it’s the first Deathwish that I have seen that opens with a dream sequence and implies that Paul Kersey feels something approaching remorse of all the killings he’s been doing.

And then it’s gone, and with it any hint that ‘The Crackdown’ is going to be significantly different that the prior two entries.

Kerzey is still an architect–and must have offices on both coasts, as much as he bounces back and forth–and he’s part of a new family.  This is, of course, before his girlfriend’s daughter is killed by a cocaine overdose, sending Kersey into vigilante mode.

He’s back in Los Angeles, though though the police don’t seem quite as apathetic (though apparently a bit more corrupt) as they have been in the other films.

A few famous faces pop up this time around as well, such as Danny Trejo (Art Zanella), Mitch Pillegi (Cannery Lab Foreman) and Tim Russ, who played Tuvok on “Star Trek: Voyager” as Jesse, a low-level drug dealer.

There a bit of a twist this time around, when Kersey is blackmailed by Nathan White (John P. Ryan) a newspaper mogul who wants him to avenge his daughter, who died of a cocaine overdose. White has this plan that would have Kersey killing anyone involved with drugs, which is a huge mandate.

Kersey’s girlfriend, Karen Sheldon (Kaye Lenz) is a reporter, and decides to do a expose on drugs, to help her make sense of her daughter’s death.

Kersey is less indiscriminate with who he kills though he spends less time dealing with minor drug dealers, instead going after the kingpins of the local drug trade.  I get the feeling that the bankers will get a pass this time around, then again I haven’t seen “Deathwish V,” so who knows?

The whole format of the series changed with this movie, with Kersey becoming more exotic in terms of his methods and resources, almost like James Bond of the vigilante set, with Nathan White playing the role of “Q.”

This is probably, with the exception of the first, the best Deathwish film I have seen because it takes the elements of the franchise we already know, and subverts them in some really interesting ways.

According to IMDB there was a final Deathwish film, “Deathwish V: The Face Of Death,” directed by Allan A. Goldstein which isn’t yet on Netflix.

Good thing too, because if I have to sit through another Deathwish movie anytime soon I going all Kersey on someone.