Let me begin by saying that I didn’t start out hating “Lost” when it originally aired back in 2004.  In fact, I honestly didn’t watch enough episodes to form any sort of opinion (of the informed variety, at any rate).

The thing is, I am a huge fan of horror and science fiction movies and television, which I mention because outlandish scenarios aren’t exactly unknown to me.  I am also a huge believer in rules.  For instance, if you establish a universe where everyone can fly, and one person can’t, then there needs to be a damned good reason for it that makes sense within the narrative.

Otherwise, it feels as if things aren’t happening organically, and every event that unfolds does so because it’s necessary to lead into the next.

I shouldn’t imply that it’s all that unusual for writers to write to move the plot along, though the difference between good and not-so-good writers is that you usually can’t tell that the good ones are doing it.

In this particular case, it was less the appearance of the ‘smoke monster,‘ than how a character responded to it.  It was a relatively small event, lasting no more than a minute, though it irritated me enough that I lost interest in everything that followed.

Enter Peter Locke (the awesome Terry O’ Quinn) who happened to be in the jungle, when the aforementioned smoke monster reared up in front of him in a manner vaguely reminiscent of a tyrannosaur from “Jerassic Park.”

And I was OK with that.  Sure, it didn’t make any sense, but the show was relatively new and I assumed things would work themselves out.  But then Locke later joined his fellow castaways, he doesn’t mention it.

As if smoke monsters were so common that they aren’t worth mentioning?  It was an odd way to react, and to my eyes made no sense, even in a place where the fantastic and unusual are commonplace.

At that point, I was done.  Besides, I was perfectly content watching “Heroes,” which took longer to jump the shark.

Damon Lindelof was one of the people behind Lost, along with J.J. Abrams.

After “Lost” Lindelof went on to work on features, one of them being “Prometheus.” And while that movie had no smoke monster, it did have characters that did a lot of contrary things, such as a biologist that doesn’t take into account at least the possibility that an unknown serpent could potentially be dangerous.  Or a geologist that maps a series of tunnels with some sophisticated technology one moment, then gets lost the next? 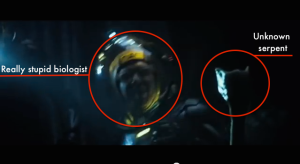 And the whole ‘Weyland apparently faking his death and then secretly stowing away on Prometheus’ subplot was ridiculous because IT WAS HIS COMPANY AND HIS SHIP.  He paid for it and could have used it to deliver pizza if he chose to.

Not quite buying it.  And speaking of the black goo, what killed the Engineers in the video that David discovered in their installation?  And why did Vickers (Charlize Theron), when the Engineer spacecraft was crashing, run in a straight line, when if she had decided to swerve she would not have been crushed.  Now to be fair, “Prometheus” was originally written by Jon Spaiths before Damon Lindelof came into the picture, and since I haven’t read his original script–which I have a copy of, and haven’t gotten around to reading–I can’t say what he or Spaiths added.

But I am going a bit afield.  Damon Lindelof is back, this time on HBO with “The Leftovers,” a series seemingly about the Rapture, and those left behind.  It’s based on the writing of Tom Perrota, who wrote the series with Lindelof.