Last episode, Melvin Potter went to work designing a costume for the Devil, because he told him that he would save whoever Fisk was threatening to keep him in thrall.

And speaking of Fisk, he’s getting shit from all sides.  Vanessa is poisoned in an attempt to get to him, and Karen Page ends up shooting (and seemingly killing) Wesley.

But to more important matters:  It’s going to happen this episode!  There is no way show runner Steven DeKnight would be so incredibly lame as to reveal the red costume in the last, especially considering that her groundwork has been laid for it for the last three or four episodes prior. 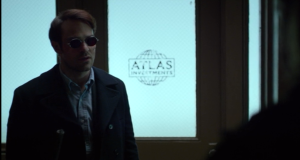 This is an interesting little Easter egg.  The sign on the office opposite Nelson & Murdock: Attorneys at Law is Atlas Investments.  The point being that the company that became Marvel Comics was known as Atlas Comics.

Take a look at the Atlas Investments logo, followed by that for Atlas Comics.  It’s pretty damn close.

And I also get the feeling that I am not going to see that damn red costume till episode 13.  I’ve come this far, so it goes without saying that I am going all the way, though I’d be lying if I said that I wasn’t a bit impatient.

That being said.  HOLY CRAP!  Wait till you see the end of this episode.  It’s not the red suit, but it hits just as hard.