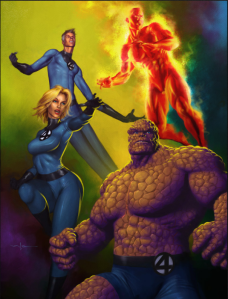 In the past few days the rumor that the rights to the Fantastic Four had been returned to Marvel has been denied by both Fox and Marvel Studios.

Marvel has granted Fox the rights to expand the Fox/X-Men universe into television, which they didn’t have prior.

Before I go any further, I think it’s worth acknowledging that Marvel Studios isn’t a charity and they aren’t going to give Fox anything for free though Marvel has given Fox the rights to make not only one television series, but two.

That’s also interesting because both of those shows, whenever they appear, will be competing against series on ABC, which like Marvel Studios is owned by Disney.

Charity is one thing, stupidity is another so I think we can disregard that Marvel gave them the rights to make two series for nothing in return.

Assuming that to be nonsense, what does Fox have–excluding the X-Men, which Marvel would love to have back but considering how much money they’re making for Fox  the likelihood that that will happen anytime soon is extremely unlikely–that Marvel Studios wants?

There’s the license to use the Fantastic Four, and all the assorted characters, in movies and…that’s it.

There could perhaps be a monetary recompense, but that would be extremely short-sighted because Marvel Studios is virtually a license to make money for Disney, so I don’t think that there’s any amount that Fox could give them that would make such a transaction worthwhile.

Then there’s this:  Fox lost somewhere in the ballpark of $150 million on Fantastic Four, so if I were them I wouldn’t be looking to pay out even more money.

So, if that’s the case, what is there that I could do that would satisfy Marvel?

All signs point to the Fantastic Four.