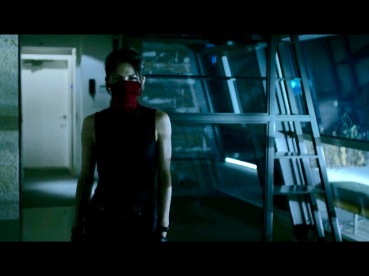 And what’s particularly interesting is that in the fight with the Yakuza, you see one of the assassins hop on a counter to watch.  This is a sign of good writing because what it shows is arrogance on the part of the assassins without anyone having to come out and say it.

What’s also cool is that visually she’s made the transition from comics to live action arguably better than Daredevil.  Her costume makes sense and doesn’t appear as tawdry as Frank Miller’s original interpretation.

And sure, in hindsight the Yakuza made a huge mistake because Elektra and Daredevil mercilessly pummel them back into the Edo Period.

And speaking of the Edo Period, here’s Battlecry from Samurai Champloo.  It’s arguably the best anime every made–Yes.  Better than Cowboy Bebop–and also where i learned a little bit about Japanese history.