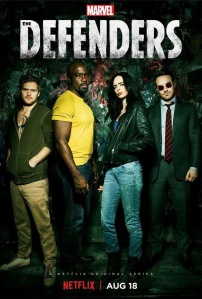 Marvel Television, as far as I can tell, is in a bind entirely of their own making.

While I enjoy the series that have done thus far–with a particular emphasis on Marvel’s Agents of S.H.I.E.L.D.–I do feel a certain reluctance on their parts to embrace the fantastic wholeheartedly (which is an interesting, though odd, problem to have).

This has a lot to do with why why the only costume we’ve seen of the four superheroes that make up The Defenders is Daredevil (which is less a costume than tactical combat armor in varying shades of red) and why the upcoming The Inhumans looks so grounded.

Comicbooks are a celebration of the fantastic, the weird, the uncanny and the strange;  a perspective that seemingly ill-fits with the Nolanesque esthetic that Marvel has created for television.

Which isn’t to say all characters should wear costumes.  I get why Jessica Jones and Luke Cage don’t–Jones tried the costumed superhero route; it didn’t take while Cage has always had less a costume than accoutrements (a tiara–there has to be another name for that–coupled wits a chain for a belt and a yellow shirt) that was more indicative of a 1970’s fashion esthetic–the character was created in 1972 by Archie Goodwin, John Romita, Sr. and George Tuska–than anything else

But Iron Fist?  He’s a character where a costume would actually make sense.  It would protect his identity–and by extension that of his family–as well as give him clothing in line with someone who engages in martial arts combat on a (more or less) regular basis.

And that’s not necessarily to say that they have to go with the spandex body suit, though something along those lines would really be appreciated.