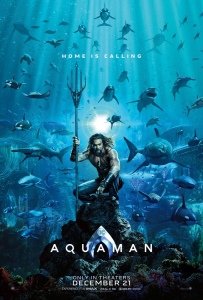 Let me be clear: I think Zach Snyder ruined the DCEU (which isn’t for a moment to imply that he did it alone. He had plenty of help from executives that were apparently so ignorant of their own IP that they let Snyder–whom no matter what he says in public does not like these characters–ruin them for likely years to come).

His vision was–on the whole–nihilistic, ugly and clearly pessimistic (which shouldn’t a shock considering Snyder is apparently a fan of Ayn Rand); which leads to James Wan’s Aquaman, a movie I care less about for the title character than it features Black Manta, who ranks among my favorite DC Comics villains.

Though I can see what Wan is trying to do. The world his Aquaman occupies seems lush and beautiful, and visually closer Guardians Of The Galaxy than anything from the DCEU thus far.

But the question is, is it enough?

I don’t think so. So, while I don’t think Aquaman will be a failure, I do expect it to underwhelm at the box office because we have literally been given no reason to care about Arthur Curry as a character.