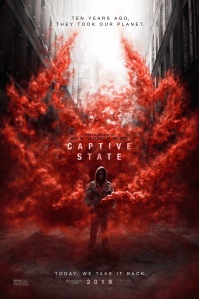 Trust me, this movie has ‘sleeper’ written all over it. A thriller in the vein of V and Colony Captive State revolves around an alien invasion of the country (world?) where some humans are cooperating while others act as a rag-tag resistance.

Have we seen this scenario before? Sure, but not recently and with movies like Aquaman, Bumblebee and The Mortal Engines on the horizon it’s oddly enough the most grounded offering we’re likely to get.

And did I mention it stars John Goodman?