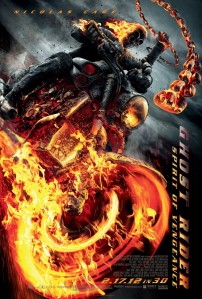 “If you value your very soul (or at least your hard-earned cash) see “Ghost Rider: Spirit of Vengeance” only from the relative safety of cable, Netflix or Redbox (when it’s available).”

I wanted to like Mark Neveldine and Brian Taylor’s “Ghost Rider: Spirit of Vengeance” because I thought that Mark Steven Johnson’s original film wasn’t terrible, but there were so many missed opportunities that I hoped a second film would go about making up for some of them.

I was wrong, because “Ghost Rider: Spirit of Vengeance” is a mess of a film that not only ignores most that came before it, but makes new mistakes along the way.

I speculate part of the reason this film is so badly done is that Sony Pictures were rushed into making it, or the rights to the character would reverted back to Marvel.

I wish that the filmmakers had let it do so, because if Marvel Studios has shown anything, it’s that they respect their characters, which is not something that I can say for Sony Pictures, or co-directors Mark Neveldine and Brian Taylor.

Their movie is so shallow, so lacking in any sort of depth–which is saying something, considering that the Ghost Rider is from an American comic book, a medium that’s not taken quite as seriously as it is in places like Europe and Japan–that it’s interesting for that reason alone.

But there’s more.  Nicolas Cage must be one of the most trusting actors ever, because the faith that he appears to put in the filmmakers is admirable, but it doesn’t appear to be reciprocated, because he often comes off as silly, or suffering from Tourette’s Syndrome, which (oddly enough) Ghost Rider doesn’t seen immune to.

Then there is the lack of faith in the character, on the part of the writers.  I suspect that it has something to do with David Goyer being one of three writers of the film, which strikes me as somewhat ironic because he tends to be the go-to guy for comic-based films, so you’d think that he would at least understand such characters.

Though a worse problem is that the Ghost Rider isn’t scary to anyone on screen, so it’s safe to assume that viewers will feel the same way (a perspective the directors don’t do anything to discourage).

I mean, he’s a man possessed by a demon that manifests as a flaming skull, so the character being just a little bit scary would have actually been welcome.  Speaking of the Ghost Rider himself (itself?), he’s better done this time around, despite this film having a significantly smaller budget than the first film.

Strangely enough, a strength (one of the few) of the first film was taken away, which was Ghost Rider’s Penance Stare, which the filmmakers of the new film decided to abandon.

Probably because it involved just a bit of subtlety, something Neveldine and Taylor have no time for.

“Ghost Rider: Spirit of Vengeance” seems to be underperforming at the box office, especially compared to the first film, though the first film cost double to produce, so perhaps this will indeed be the last Ghost Rider film released through Sony Pictures.