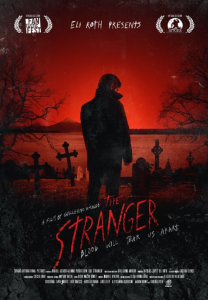 Guillermo Almoedo’s The Stranger plays like a sequel of sorts to Kathryn Bigelow’s Near Dark, except that it’s really irritating at times, which I will go into later.

The problem is that virtually everyone in the movie is a victim, and the only person who isn’t, Lieutenant De Luca (Luis Gnecco), is a massive asshole.  What’s even stranger is that he’s not the chief of the small-town police department where he works–who happened to be out of town– but he acts like he is.

And what’s even worse, everyone else does as well, so he moves around either intimidating or terrorizing everyone around him.

His son, Caleb (Ariel Levy), is a chip off the old block (which means that he and his friends can seemingly murder vagrants with impunity) so we’re pretty much left with characters that are barely players in their own story.

Vampirism, in this context The Stranger, has nothing to do with religion in that a person who’s infected will seek out others to drink blood from, spreading the infection.  The infected don’t have virtually any attributes of a traditional vampire–other than a thirst for blood and aversion to sunlight–though the infected are able to take significantly more abuse that a regular person.

In other words, virtually none of the traditional perks of vampirism–and virtually all the weaknesses.

Thanks, but no thanks.