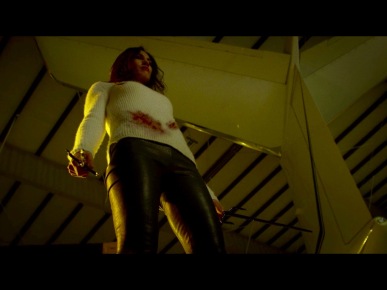 For awhile, despite my serious love for everything that was unfolding in Daredevil, I was wondering how they were going to manage to embrace the more fantastical aspects of the Marvel Universe.

In the world that exists in Marvel Televised Universe, the heroes are much more grounded than they are in its cinematic brethren so for awhile I was thinking that those fantastical elements would be gone (or at the very least minimized).

And while a part of me was okay with that, I would have liked to see them here as well.

As I mentioned a few posts ago, the First Season introduced the idea of a ‘Black Sky’ for a few episodes, then pretty much ignored it, which made me think that it was an abandoned plot thread.

Boy, was I wrong because it’s seriously bearing fruit as we see Daredevil embrace not only the brutally realistic, but the ritualistic and hopefully, the magical as well.

And it might be just me, but it looks like the budget must have gone up significantly because this episode features at least two helicopter shots, and they’re not cheap.