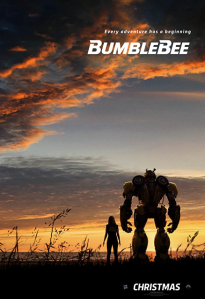 Before I begin, I have not been a fan of the Transformers franchise since the first one.

Once you get over they’re robots changing into cars, trucks and fighter craft there just isn’t that much there.

Which would be bad enough if the movies weren’t–to varying degrees–chock full of cynicism, contempt for the viewer, sexism and oddly enough, racism.

That being said, I have no idea how Bumblebee will perform–though it’s worth keeping in mind that the Transformers movies have been on a downward slide since Age of Extinction (which is a pretty remarkable when you think about it because most of prior films are bad, though that badness also varied  from film to film)–though the teaser has more heart than the last four movies combined.

And it’s important that that tone carry though most of the movie because if Bumblebee needs anything it’s to differentiate itself from what came prior.

And besides, Paramount really, REALLY needs a hit.