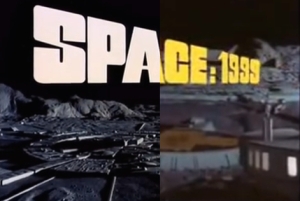 The debate over whether the Year One or Two of Space: 1999 is one that will probably rank relatively low among the questions that plague mankind by their elusiveness.

Unless you happen to be a person that prefers one or the other, in which case the answer is fairly obvious and the question somewhat pointless.

Space: 1999 is the story of Moonbase Alpha, which due to an explosion of its nuclear waste dumps–a hungry Earth, wanting the benefits of nuclear power and minimal risk stored waste products from its production there–is torn from the embrace of Earth’s gravitational field and sent hurling through the cosmos.

The first year of the Alphans exodus was a somber affair, as if in space no one could see you smile.  The show was quite well-written, but somewhat joyless.  And while I understood that there probably isn’t all that much to be happy about being trapped on a runaway moon, there were moments that I got the feeling that these people were either in shock or chronically depressed.

This must have been troubling to the creator and executive producer of the series, Gerry Anderson.  I suspect that he was proud of his show, which he worked created with his former wife, Sylvia.  It was his second series to use people of flesh and blood as opposed to plastic and wire, but I imagine that he was vexed by how stagnant the show felt.

I don’t know what was going through his mind when Sir Lew Grade, head of ITC Entertainment, asked for another season, but his actions were telling.

Anderson hired Fred Freiberger, who prior worked on the third and last year of Gene Roddenberry‘s “Star Trek,” to produce.  He came in and cleaned house, changing virtually everything that came before.  Barry Grey’s somewhat contemplative and sombre opening theme was replaced with one that had more immediacy and a tangible sense of adventure by Derek Wadsworth.

In fact, Year Two under his stewardship was so drastically different from Year One that the only analogy I can find to describe it is if Sir Arthur Conan Doyle had originally began the adventures of Sherlock Holmes with Dr. John Watson, and suddenly switched him with Professor James Moriarty, without reason or even an attempt at an explanation.

In fact most the original cast, with the exception of Martin Landau, Barbara Bain and Nick Tate vanished (the only reason that Freiberger kept Tate on was because his character was extremely popular with fans of the show).  Barry Morse (Victor Bergman) did not return due to problems over salary and Clifton Jones (David Kano) left the show for unknown reasons.  Both were replaced by Catherine Schell (Maya), a character introduced in the Year Two premiere episode, “The Metamorph.”  Prentis Jones (Paul Morrow) also vanished without explanation and was replaced by Tony Anholt (Tony Verderchi).

The new series, if the first episode was any indicator, was dynamic while the first was contemplative.  The inhabitants of Alpha, despite their dire straits, occasionally found joy in their situation and situations were more explosive (sometimes literally, because things blew up a lot more) and action-orientated.

The change was admittedly jarring but the frenetic pace of the new series of Space: 1999 made them easier to overlook because Year Two of Space: 1999, despite having the same name, felt entirely new and strangely–because of the cast changes–unrelated to the first series.

The first year of the series had its share of alien creatures, one of the creepiest being the tentacled nightmares from the episode “Dragon’s Domain.”  In Year Two they were significantly more common, and tended to be of the man-in-a-rubber-suit variety.  In fact, sometimes it seemed like whenever there was a story-related problem that the producers had difficulty dealing with, a monster was tossed into the mix, something that the first year rarely did.

Earlier I mentioned that Year Two introduced a new science officer, an alien from the planet Psychon, who possessed the secret of molecular transformation (what’s curious is that she was taught this ability by her father, Mentor (Brian Blessed) though he appeared unable to use it himself, even to save his own life.  This feels like an oversight on the part of the writer of the episode, Johnny Byrne, though I am surprised that it appears to have gone unnoticed–or at least uncommented upon–by anyone else involved).

And I deliberately used the word “secret” instead of “power” because it appeared that her shape-shifting ability was somehow an application, a manifestation of will.  In fact, in the Year Two episode “Dorzak,” written by Charles Woodgrove (a pseudonym for Fred Freiburger) Maya revealed the secret of molecular transformation to another Psychon, Dorzak, and he was able to also change form.

Which is an indicator that it is a learned technique, though it’s unknown if it was within the capacity of humans to do so, or if Maya just didn’t want to tell the Alphans the secret of her ability.

Year One of Space: 1999 was, generally speaking, better than the Year Two because of it’s consistency.  Virtually all the episodes, even the action-orientated ones, were more contemplative and aware of the perilous balance that made up the life on Moonbase Alpha.

Yet this tendency toward a measured, considered pace often gave the first year a numbing quality, something addressed in Year Two.

That being said, when a Year Two episode worked on all cylinders, it was a joy to behold!  For instance, the episode “Space Warp,” directed by Peter Medak, not only had some incredible movie-grade special effects–effects that hold up to this very day–by Brian Johnson and Nick Allder but was shot in a way that reflected the peril and uncertainty of the Alphans situation in an animated fashion, unlike most episodes in Year One.

What’s interesting is that among the special effects there are some fascinating philosophical issues considered, which according to some wasn’t a strong point of the second series (it wasn’t necessarily the case, though it admittedly favored monster of the week-type episodees over those of a more cerebral nature).

And as I mentioned earlier, when Year Two worked, it worked well.  I offer the 24th episode “The Dorcons,” for your perusal.  It involved an alien race, the Dorcons, that came to Moonbase Alpha once they learned that Maya, as far as anyone knows was the last remaining Psychon, resided there.  You see, the Dorcons possessed a method of extending the lives of their leaders, which unfortunately requires the brain stem of a Psychon to work.

And you can’t harvest a brain stem of a person from Psychon without the donor ending up a vegetable, so there’s a bit of a dilemma there.  Another is that the Dorcons are the dominant power in their sector of space, where they maintain order and balance, with the Archon at the head.  If he dies without a successor strong enough to keep things in line, their empire could potentially crumble, effecting billions of people.

So, either the Alphans surrender Maya to the Dorcons, they take her brain stem, making her functionally a cabbage, and they go on their way or the Alphans deny them, in which case they take Maya anyway, and destroy Alpha for their bother. The philosophical underpinnings of the episode get your attention, though it’s the acting that sells it.

In particular, the performance of Gerry Sundquist, who played Malic, the heir apparent to the Archon.  He has a problem with the whole arrangement, namely that if the Archon receives his brain stem implant and lives, Malic will never advance to the position.  So, while Consul Varda (Ann Firbank) worked to obtain Maya’s brain stem, Malic was plotting and scheming behind everyone’s back in an attempt to twist events to his favor.

Someone must have told Sundquist to play Malic like Hamlet in space because he approaches the role as if it were Shakespeare, and plays things broad and hammy, chewing scenery everywhere he turns up.  It an interesting performance, over-the-top, somewhat campy and fun to watch.

It’s a rare take on the character not typical for the series with the closest thing I can recall to it being Capt. Jack Tanner (John Shrapnel) from the Year One episode, “Death’s Other Dominion,” directed by Charles Crichton.

There were also the Year Two episodes, “The Bringers of Wonder,” Part One and Two, “Journey To Where ” (interestingly enough, the third episode of the series dealing with matter transportation, a mainstay of Gene Roddenberry’s Star Trek, which Fred Freiberger worked on), “The Exiles,””Seance Spectre,” and “The Chrysalis ABC,” episodes that were as good, if not better, than anything produced in Year One (though the latter didn’t age quite as well as the five other former episodes).

I would even include “One Moment Of Humanity” if you consider it thematically (though the dancing and music in that episode date it big time).

So, as long as there are fans of Gerry Anderson’s Space: 1999 there will be people who claim that Year One is superior to Year Two.  And while I understand their argument, and sympathize, though only to a point because when Year Two worked it made for some of the best episodes of the series.