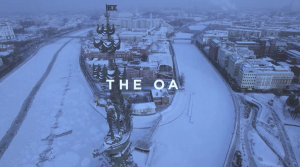 I published a video earlier this week on YouTube reviewing Netflix’s The OA, which I thought was a pretty remarkable bit of television.

I figure that I’d expand on what I said in the video, without spoiling the experience for people who haven’t seen it yet (besides, spoilers suck).

Brit Marling wrote most of eight episodes with Zal Batmanglij, (the latter having directed them all as well) and also played ‘OA,’ a woman who when she apparently dropped off the face of the Earth seven or so years ago was blind, yet could now somehow see.

How she regained her vision is one of the lesser mysteries in a series filled with them as OA accounts for the missing time.

We also come to learn that OA’s given name was Prairie (given by whom and why being another one of those minor mysteries central to her story).

What’s perhaps most interesting is OA/Prarie’s status as a narrator, which is to say that as the series goes on what she believes and the truth are not always the same things.

It’s this tension between whether or not OA/Prairie’s version of events is an accurate one is at the heart of the story.