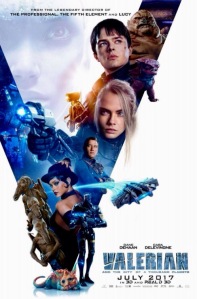 Reviews have begun to drop for Luc Besson’s Valerian and the City of a Thousand Planets, and while it’s early days yet, let’s just say they haven’t been charitable.

The Hollywood Reporter’s Todd McCarthy was particularly tough on Besson’s latest effort, saying, ‘Valerian and the City of a Thousand Planets really is that bad, bad enough you don’t know for longest time that Valerian is one of the lead characters and not a planet or a spaceship.’

Steve Pond  of The Wrap was slightly more charitable, saying ‘(Luc) Besson takes all that fun and color, along with a wild array of fantastic creatures, and deploys (them) in service of a big, dopey story that remains resolutely uninvolving and quite often annoying.’

Now, as I said earlier, it’s early days yet and a few mediocre reviews aren’t likely enough to torpedo Valerian’s chances at the domestic box office (after all, it’s taken five movies before many moviegoers in the United States noticed that the Transformers movies are really, really bad).

Though I get the feeling at that we’re not going to see Spider-Man: Homecoming-type box office when the movie goes into wide release.