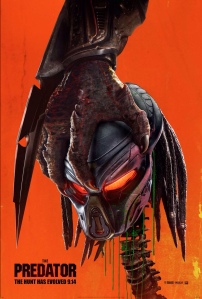 I’m looking forward to Shane Black’s take on the Predator franchise but at the same time I’m not too sure it’s going to work out.

He’s clearly good at what he does (after all, he wrote Lethal Weapon, The Long Kiss Goodnight, The Last Boy Scout and directed Iron Man 3, among others) though he comes off a bit arrogant, which to me says he just might make a Predator movie that ignores ‘crucial’–at the end of the day we’re talking about a movie, not open heart surgery–aspects of the character’s mythology in the name of being snarky or clever.

We’ll see because for me this is one that I have to catch in a theater.