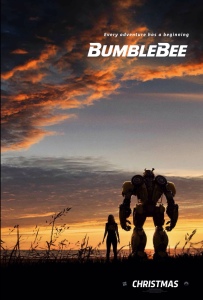 When you were a child and the first time you saw a bee and chased after it, because that’s what children do–or maybe pulled a dog’s tail–you had no real idea what was going or happen, though you likely learned from that initial (potentially painful) experience.

That in a nutshell is how I feel about the Transformers movies. If you’ve never seen one before–or absolutely loved Stuart Gordon’s Robot Jox as I did–you’d likely say to yourself ‘giant robots that transform to cars, trucks and fighter planes! What can possibly go wrong!?’

Though when you actually see the movies (with the exception of the first) you quickly realize that the answer to that question is: ‘A whole lot.’

Though it’s a good sign that the trailer has more heart than all the Transformers movies combined, that is before it turns from a story of a girl and her robot to what looks like a typical Transformers movie, by which I mean A LOT of overly CGI-ed action schlock.

Though I’d be lying if I didn’t admit that it looks…fun.