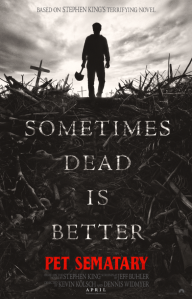 Stephen King was a cottage industry long before this apparent frenzy–likely due to the bazillion dollars IT made; a movie that was…fine but by no means as anything as people seemed to think–to remake his books came into play.

Which when you think about it is a bit odd because it’s not like King doesn’t have plenty of other books that haven’t yet been made into movies.

In any case, this latest version of Pet Seminary is directed by Kevin Kölsch and Dennis Widmyer, who did the excellent Starry Eyes.

The trailer itself is okay though there’s one scene that’s a bit over the top and if it’s actually in here–there’s no way of knowing because it’s not unusual that trailers sometimes contain footage nowhere to be found in the actual movie–it could threaten to take viewers out of the movie, if only for a moment.