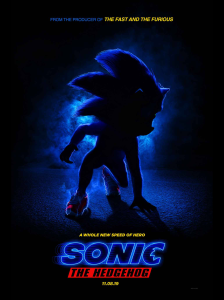 Recently Paramount released a motion poster for their upcoming Sonic The Hedgehog movie, and it looks…interesting, to put it charitably (and I don’t mean in a good way).

The biggest problem seems like the producers may be aiming for a more realistic interpretation of the over-caffeinated Erinaceomorpha (in other words, not a rodent).

Though more importantly, which audience is Sonic aimed at? As a video game character he’s been consistently in the public eye on various platforms since 1991, but that doesn’t necessarily mean that there’s an audience for the character in a live-action/CGI feature.

Because, if 1993’s Super Mario Brothers has shown us anything it’s that not every property is well suited for a hybrid live action/CGI feature film (Which brings to mind Universal’s upcoming Pokémon Detective Pekachu).

Though apparently Paramount has faith because they’ve moved up the release date from the video game feature from November 15th from the 22nd.