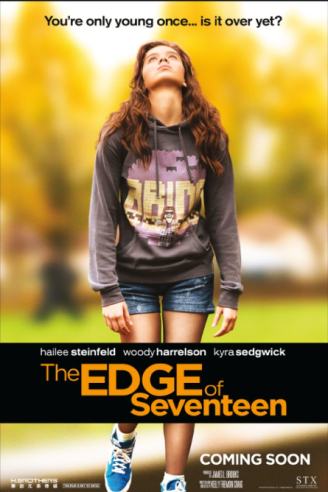 I don’t tend to be a comedy guy–I enjoy them, but don’t tend to go out of my way to catch one–but the trailer for Kelly Fremon’s The Edge of Seventeen really caught my attention.

First off, it apparently recognizes that the best comedy comes from tragedy, so there’s a girl, Nadine Byrd (Hailee Steinfeld), who’s doing her best to navigate the waters of rapidly approaching adulthood.

This journey is made even more perilous by her brother, who’s confident where she’s timorous, popular where she’s a wallflower.

And if that weren’t bad enough, he’s fallen for her best friend.

And there’s Woody Harrelson, a guidance counselor (or favorite teacher.  You really can’t tell from the trailer) of Byrd’s who acts, at times, as an unwilling witness to her angst.

And by the way, Tom Cruise, The Edge of Seventeen is a great title for a movie of this type.

‘The Edge of…’ just about anything is a terrible title for a hard sci-fi feature (which doesn’t apply to the Star Trek episode, City on the Edge of Forever because it issued from the always fertile mind of Harlan Ellison).