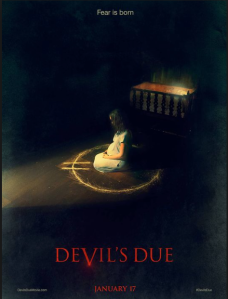 “”Devil’s Due” is slightly more ambitious that most found-footage movies, though suffers from problems built into the format.”

Having seen Matt Bettinelli-Olpin‘s and Tyler Gillett‘s “Devil’s Due,” about a newly married couple destined to give birth to the Antichrist, it’s obvious that the found-footage trend, ushered in by the 1999 film “The Blair Witch Project” and made mainstream with the Paranormal Activity films, needs a break so that it can recover the sense of freshness and spontaneity that made such films so intriguing in the first place.

Which will not happen any time soon because these movies are so cheap to produce.

For instance, “Devil’s Due” cost $7 million to make, and earned almost $33 million dollars, which is a really tidy profit.

The premise of the movie while by no means unique, is at least interesting, though like other films in this genre it makes little in the way of sense because there are too many situations where someone would not be walking around with a camera.

Most found-footage movies at least stick to the cameras at hand, though “Devil Due” expands to using footage from literally any camera in an area, which the characters shouldn’t have any access to, as storytelling devices.  It makes no sense at all and kind of takes you out of the movie if you give it any thought.

For instance, when Samantha McCall (Allison Miller) is shopping at a supermarket, you see footage of her in the store’s surveillance cameras.  Are we supposed to believe that Zach McCall (Zach Gilford) has somehow gotten hold of the supermarket footage, and edited it into his home movie?

This happens again when they are shopping elsewhere for baby stuff, which is distracting.

And if that weren’t bad enough, they use cameras when no logical person would.

Early in the movie, they’re on their honeymoon, in a country they had never been before, in a rough-looking part of town, at night, with a video camera.

Sure, when I travel in foreign countries I like nothing better that to walk around at night and advertise that I am an American with lots of disposable income, because few things complete the exotic travel experience for me more than being held up.

But that’s just me.  I assume most people would know better, yet the McCalls aren’t even harassed, never mind robbed.

As her pregnancy comes closer to being due, weird events begin to become commonplace, such as strangers staring up at the room they’re preparing for the child, who suddenly walk away when their noticed.  And their original obstetrician becomes unavailable, with the most perfunctory of explanations.

The baby appears to have guardians, followers who are awaiting its arrival.  They hide cameras throughout the McCall home, which is an interesting touch (and strangely enough, that Zach apparently can access to make his home movie).  Though I have to wonder why are we seeing footage from them.  Did these Satanists decide to share their footage with the McCalls, like the supermarket and Security at the parking lot?

And if so, these have got to be some of the most considerate religious zealots in movie history (if you can get beyond the impregnating of innocent women with the spawn of Satan, that is).

“Devil’s Due” is essentially the found-footage version of “The Omen,” and even though we’re talking about a movie about the Antichrist, that doesn’t mean that it shouldn’t at least adhere to some sort of logic.

I should also add that the title, Devil’s Due, is pretty clever because it works on multiple levels (I love titles that do that).

One thought on “‘Devil’s Due’ Review”