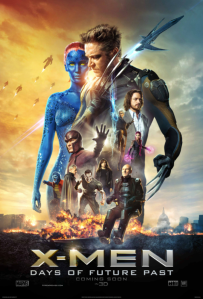 SPOILERS ABOUND!  IF YOU HAVE NOT SEEN X-MEN: DAYS OF FUTURE PAST GO AWAY TILL YOU HAVE BECAUSE SPOILERS ARE LIKE LANDMINES.  THEY’RE HIDDEN TILL YOU STUMBLE UPON THEM, THOUGH BY THAT TIME IT’S TOO LATE, AND SOMETHING IMPORTANT IS LOST.

The film opens in New York, and on the future of the X-Men.  Everything is devastated, remnants of the conflict between mutants, their sympathizers, and the Sentinels (robots created by Trask Enterprises to protect humankind against mutants).

And the mutants aren’t winning because these Sentinels have evolved the ability to mimic the powers of any mutant that they face.  This ability, coupled with their ever increasing numbers, means that there’s no way–no matter how powerful they are–that the mutants can hold them off for long.

In fact, the only way that the remaining mutants are able to survive the threat of the Sentinels is to go backward in time a few days, once they learn of an attack, which has the effect of undoing it.

They’re able to do this reatively successfully because their resident tracker, Warpath (Booboo Stewart) is able to sense when the Sentinels are within minutes of an attack, which means that they can prepare to send Bishop back in time before it happens, while the remaining X-Men act to delay them.

But they’re running out of options, as well as time.

When I have a choice between good and bad news I tend to go with the bad first, to get it out of the way, like when you pull of a Band-Aid really quickly.

So here goes.  It’ll only sting for a minute…

I get it.  Wolverine (Hugh Jackman) is awesome.  What’s irritating is the way the franchise seems to rely on him for just about everything.  This tendency is made significantly worse when you take into account that there are five or six other people would wouldn’t mind a little time in the sun as well.

And that’s not to imply that I don’t like Jackman as an actor.  Far from it, but when we’re talking about a team of individuals it would be nice to see the spotlight focused on someone else every once in awhile.

For instance, every time (the film doesn’t indicate how many, but I assume it’s a lot) the X-Men in the future encountered the Sentinels they were beaten because their opponents were designed to counter their abilities, as well as having the advantage that comes with overwhelming numerical superiority.

I mention it because it implies that Bishop (Omar Sy) being sent back in time wasn’t uncommon (admittedly for only days or weeks at a time, though).  So why was Wolverine all of a sudden better suited for the task?  The explanation given, that the process was too difficult for anyone without Wolverine’s mutant healing abilities, makes no sense because it’s not like his physical body was being sent.

Wolverine, on a mental or spiritual level, is no hardier than any of the other X-Men.  That being said, I assume the film makers decided that he should go–as opposed to anyone else–as proof of their fixation with the character.

Unfortunately Bryan Singer, like other directors of the franchise, also cannot give any other character anything close to equal time with Wolverine, which creates a self-fulfilling cycle:  People don’t like the other characters as much because they know little about them.  And they know little about them because Wolverine keeps sucking up all the oxygen.

It’s a really an odd choice when you take into account that 20th Century Fox supposedly wants to create a greater X-Men universe.

There’s a scene about midway in the movie, where Erik Lehnsherr/Magneto (Michael Fassbender), co-opts Bolivar Trask’s (Peter Dinklage) control of the Sentinels by lacing them with iron from railroad tines.  The basis for Magneto doing this is established a few scenes earlier, when he’s seen intently studying the plans for the robots that he and his allies took when Mystique (Jennifer Lawrence) crashed the Vietnam peace accords.

Which is remarkably dopey because it works on what I like to call ‘The Superman Fallacy.’  The basis of the concept is the assumption by writers that just because a character can do one thing very well, that this competence extends to everything else that they do.  For instance, Superman has super strength, super speed and super vision, so it should go without saying that his thought processes are somehow more evolved as well.

Which is nonsense (if Man Of Steel showed anything, it’s that).

In the case of Lehnsherr it’s used because, while his mutant ability is manipulation of metal, it’s implied that he would somehow know how to infuse the Sentinels with iron in such as way as to make them fall under his control, since they were crafted with none originally (it’s also extremely unlikely that in the 1970’s we had plastics or ceramics with the ability to conduct electricity without melting, deforming or breaking) as a direct counter to his abilities.

The problem is that Magneto, as far as I know, isn’t a robotics engineer (or any sort of engineer, for that matter).  This means that those blueprints that the movie has him staring at with the intensity that Michael Fassbender does really well, should have resulted in little more than a headache.  Because you can stare at design schematics till the cows come home, without an understanding of the science they’re based on, you’re just looking at lots of squiggly lines, with minimal in the way of meaning.

In fact, interpreting them should have been beyond his capabilities (though Beast probably could have translated their contents for him, but since Magneto’s plan could’ve very well resulted in his death, I don’t buy it) because his character isn’t an engineer, never mind a robotics engineer.

He shouldn’t have been able to make heads or tails of those Sentinel schematics, never mind use them to take control of the robots.

But let’s say for argument’s sake he was able to comprehend enough to know that he had to infuse their systems with metal.  Sure, that would give him physical control of the robots, but it wouldn’t control their higher functions at all, such as how they’re processing information.

Now if it were Electro (Jamie Foxx, from The Amazing Spider-Man 2) I could grudgingly accept it.

I don’t think that I have seen a Bryan Singer movie before where he was able to coax such great performances from his actors (though Storm appears almost apathetic at times, though considering the length of her role, I could see why).  Everyone is buying what’s he’s selling, which makes some of the more sillier moments barely noticeable, and good moments border on magnificent.

The camera just flows over crowds and people and the cinematography by Newton Howard Siegel is gorgeous, rending the past in bright colors and lots of light, while the future is dark, rendered in dark blues, grey and blacks and often shrouded in fog.

The special effects are top-notch (quite a bit of  the heavy lifting seems to have been done by a French effects house, if the amount of French surnames in the credits is any indication.  If that’s the case, it’s odd, considering that quite a few American special effects houses have been flirting with bankruptcy or leaving the country recently) though the Sunspot effect was way too busy.  I understand that they were trying to evoke the look of a sun erupting with plasma, but there was just too much going on visually.

The future Sentinels were interesting, and when they used their power it was somewhat reminiscent of the Destroyer from Kenneth Branagh’s Thor.

Though the most praise I have reserved for when I first saw Quicksilver (Evan Peters) in action.  Sure his costume, such as it is, is dopey but the scene where we see him unleash his powers is such a remarkably joyful one (and oddly reminiscent of something I could see The Three Stooges doing) that it all just worked.  It’s really an incredible scene, and frankly something that I would expect more form Edgar Wright than from Bryan Singer.  It’s such a tour-de-force of editing and various types of special effects seamlessly rendered that it needs to be seen to be believed.

Verdict:  Definitely worth seeing in theaters.  X-Men: Days Of Future Past is by no means a perfect movie, but when it shines, it’s dazzling.

One thought on “‘X-Men: Days Of Future Past’ Review”