“Not quite.  They’re calling this one ‘The Punisher.'”

“Hold on.  Sure I can’t get you anything else?  You know, I’ve got it all, man.  Yeah, bondage, backdoor, grannies, or maybe you’re in the market for something younger.  She’s barely 12.  Guaranteed.” 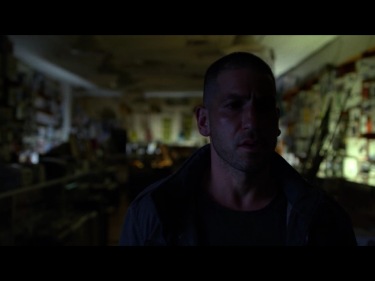 What a quote-worthy episode!

Every since Daredevil assumed his new duds, he’s been brimming with confidence, which has a lot to do with with their being no one–beyond Fisk or Nabu–who’s at his level.

Well, the holiday is over because Frank Castle has rolled into Hell’s Kitchen, and he’s not only taking no prisoners, he’s skilled enough to take on the Devil of Hell’s Kitchen.

This episode sees the return of Melvin Potter (Matt Gerald), which makes me think an appearance by Gladiator might be in our future!

What’s pretty amazing is that somehow the producers (it should go without saying that I mean writers, directors, costume artists and makeup and whomever does the cinematography) somehow manage to make Charlie Cox–who normally seems like a pretty unassuming actor–look like a total badass.