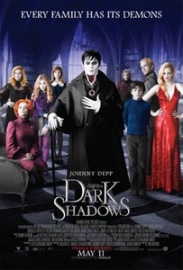 Johnny Depp is once again teaming with director Tim Burton, and the latest result of their collaboration is a new version of Dan Curtis‘s “Dark Shadows.”

When I first saw the first pictures of Johnny Depp as vampire Barnabas Collins, they felt just a bit…campy and lacking in anything approaching subtlety.  After seeing the trailer, that doesn’t appear to be an accident.

Unlike the soap opera the movie is based upon (a soap opera that happened to feature vampiers, werewolves, and other assorted monsters) this “Dark Shadows” appears to be more of a comedy.  Here’s an episode of the original series, by way of comparison.